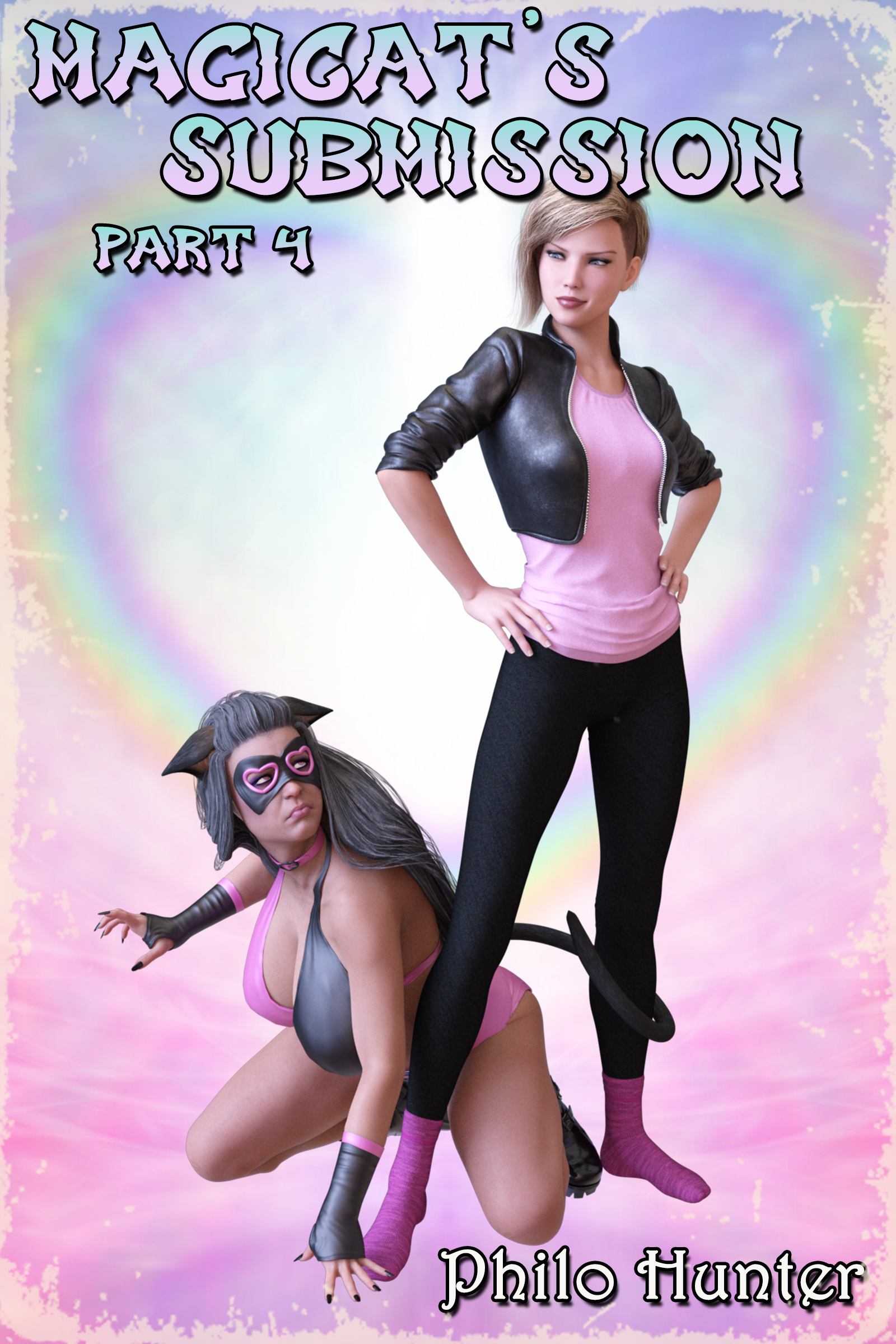 Catalina is embracing and settling into her new life as Mixie and Domina’s pet, flush with the growing acceptance that for her at least this complicated, perverse game of master and slave they are playing is more than just sex. Catalina Espinar loves Mixie Moonsong, but what about Domina and Magicat?

The two transformed magical girls get to take center stage before Catalina. Magicat will need to submit before the night can move on to the untransformed girls’ planned festivities. She will, but Domina has a surprise in store for her: it’s not HER the magical cat girl will be submitting to.

Magicat will submit to Mixie, but for how long? And what happens when the power dynamics are reversed? And most importantly if Catalina loves Mixie, how does Mixie feel about her?

Intense sensual passion and emotional revelations are followed by chilling revelations as Mixie manages to pull back the shimmering magical curtain the Magiforce has draped over their lives, peeking backstage to get a glimpse of the truth.

You may have noticed a bit of a change in the projects I’ve been working on over the last couple of months. For a bit there I was leaning hard into Non-con stuff. I’ve burnt myself out pretty hard on those kinds of stories and will be leaning in the opposite direction for the foreseeable future, writing Amazon friendly stories with no Non-con and only some Dub-con. I’m also going to be limiting myself to just a couple of serialized stories with no poll driven stuff. There will also be a much stronger focus on woman/woman sex with only occasional man/woman sex.

Hopefully what I’ll be writing will have enough of what my fans enjoyed about my writing to keep your interest. I’ll be continuing Magicat’s Submission and hopefully I’ll be able to keep up the steady publication of new parts (although it may slow down a bit now that it is summer).

I’ve also started a new Urban Paranormal story that should see its first book published in a week or two (and if you back on Patreon or Subscribestar you will be able to read it chapter by chapter as it’s finished). The focus of the story will be woman/woman sex but there will be some woman/man stuff along with tentacles and perhaps some futa stuff eventually.

The newest book in this serialized story is out on Amazon.

Catalina and Mixie are realizing they aren’t and have never been Magicat and Domina, that both women they transform into are separate entities that have been controlling them.

Catalina, whose life till then has been one of passive waiting till she can transform into Magicat, is for the first time feeling it is enough. She is happy with her new life full of submission, bondage, and nonstop lust. But that means she no longer needs Magicat the way she used to which has left the two halves growing further apart.
While Magicat struggles with her loss of control over Catalina she also finds she’s losing the power she’s had over Domina as well. She will lash out at the unfamiliar sense of powerlessness as she goes from pretending to submit to experiencing true submission.

As Domina and Mixie further structure their life around being Catalina and Magicat’s Mistress they are becoming more separate yet managing to grow closer. Their connection to the Magiforce is becoming clearer, allowing them to dominate Magicat better. Both are working well together, yet the emotions that Catalina is making Mixie feel will lead to the beginning of a power struggle between them.

Meanwhile Catalina will accidentally draw her ex-girlfriend Sara, another magical girl, into the mess she’s gotten herself into.

The second part of this serialized story is out on Amazon.

Catalina wakes to a new life, one where she and her alter-ego Magicat have submitted completely to her roommate Mixie Moonsong and her alter-ego, bad girl Domina. Her life of submission begins with surprises, new rules, and treats. Along the way mousy, plump little Catalina will for the first time interact with the Domina, the beautiful but imposing villainess her other self has spent so much time battling. The encounter is terrifying yet highly sexually gratifying.

Things go less smoothly when Mixie Moonsong comes face to face with Magicat. The transformed magical girl is not as ready to submit to Catalina’s bossy roommate, nor is she eager to have her life mixing so openly with that of her other half. Mixie Moonsong might not have any of her transformed alter-ego’s powers but in the end she WILL make Magicat submit.

After their intense confrontation is over Catalina returns to discover more of what her life of submission will be like. A slice of domestic bliss that will end in a night of intimate treats and further passions in the morning as her true feelings for Mixie Moonsong begin to become apparent to her.

It will be a whirlwind day in their lives that will be just the beginning of Magicat and Catalina’s ongoing submission to Domina and Mixie Moonsong. 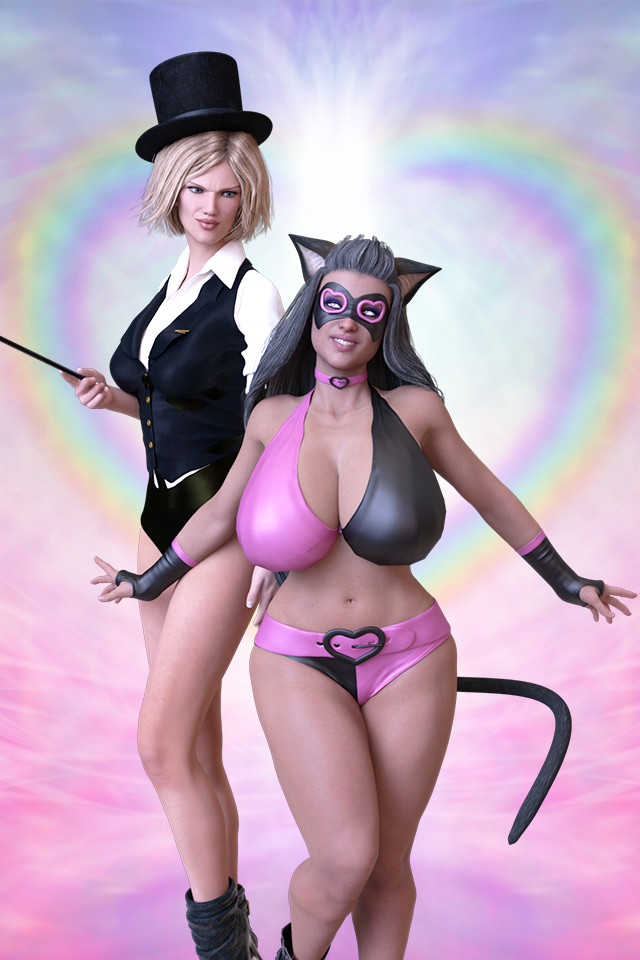 The first part of a new Amazon friendly serialized story is out and can be found HERE.

Blessed with powers that let them transform into beautiful and powerful superheroines for a limited amount of time, the magical girls protect the innocent and fight crime. But they aren’t the only ones blessed with powers from the Magiforce. There are other girls who use the powers the Magiforce has bestowed upon them in much more selfish ways.

The magical girls have complicated relationships with these villainesses they refer to as “bad girls”. The clashing of opposing Magiforce creates powerful feedback in both girls, leading to intense sexual feelings. For those pure of heart, the heroines, this produces strong feelings of submissiveness, feelings the bad girls are more than happy to indulge in.

When the magical girls clash there is little fighting, instead, it is a clash of enemies becoming lovers. A battle of domination and submission. Yet these clashes of sapphic indulgence are not what the villainesses think they are. They may always end up having their way with the magical girls that oppose them, but in the end when their Magiforce starts to run out and they must return to their everyday alter-egos it will be with their evil plans foiled due to the sexual distraction the magical girl they’ve dominated has caused.

Ever since her alter ego Catalina has moved in with her new roommate Mixie, the magical girl Magicat has been having a lot of run-ins with the villainess Domina. With all of her plans foiled, bad girl Domina has decided it’s time to put an end to the busty feline’s medaling. She’s decided she’ll discover her secret identity and put an end to her meddling by removing that person from the picture.

Her search comes to an early and unexpected end when she discovers the startling truth: her mousy, bookish Latina roommate Catalina is the sexy feline heroine’s alter-ego! The truth comes out during an unexpected night of passion between Mixie and Catalina and leads to something even more unexpected: Magicat’s complete sexual submission to Domina AND Mixie!

On a side note: I recently reached genre burnout on fantasy stuff and this is part of a creative pivot for the time being. For now I’m just going to be working on this and one other project and once I get the ball rolling on the other one I’ll hopefully be able to get new parts of their stories out at a regular pace till they are done.

The second books worth of The Doom of Thessalia’s Lambs has been taken off the free story section and published as an ebook. It can now be found exclusively on Smashwords. If you’ve enjoyed the story and would like to read it again, and want to financially support me, please think about picking up a copy!

Also if you are currently backing me on Patreon or Subscribestar at the 3$ or higher level during the next few weeks you’ll be able to get a free copy as part of your rewards. 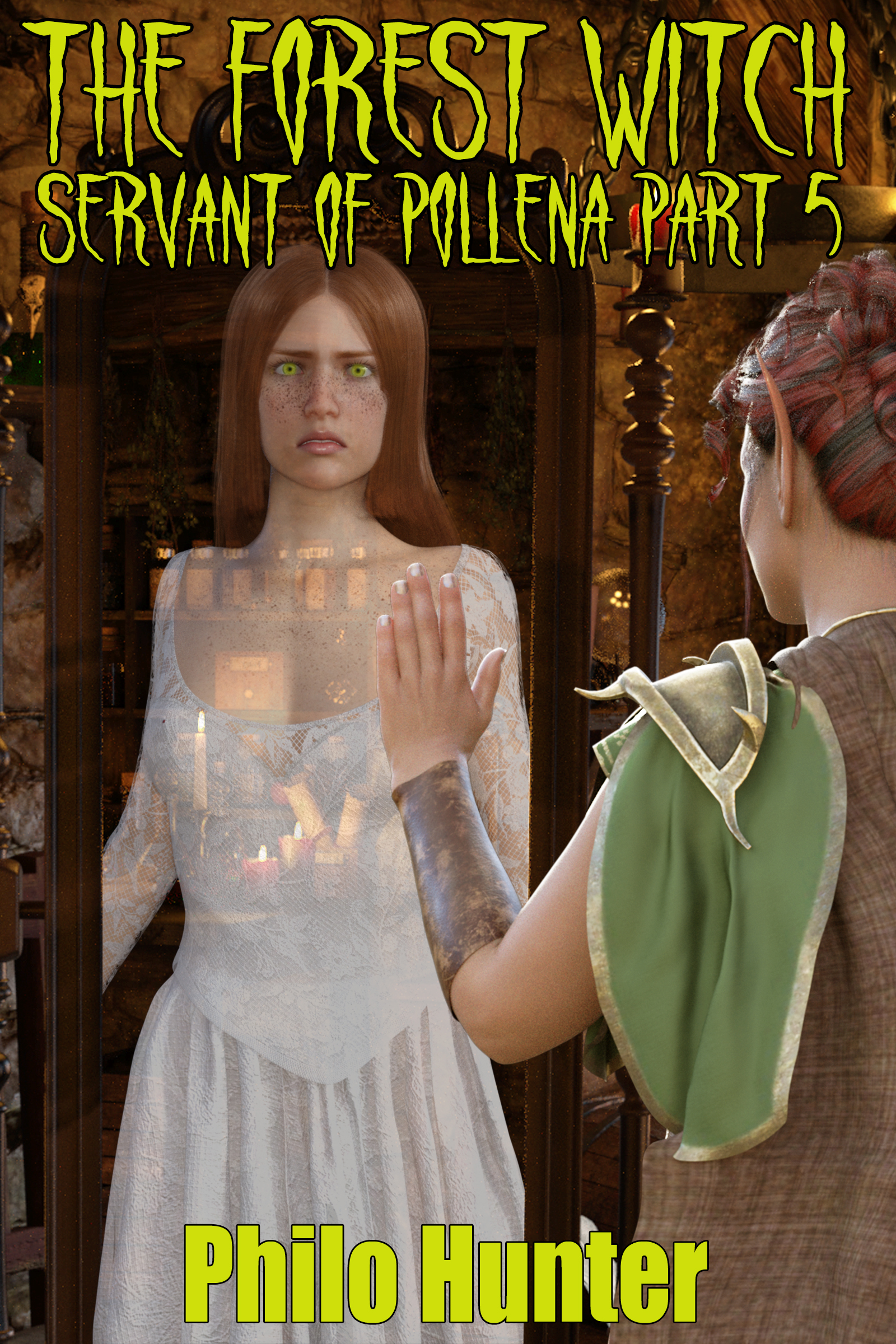 Tynian’s journey of sensual discovery in the Forest Witch’s cabin comes to end an end when her “precious darlings” take her deep into the woods to their arboreal apiary to retrieve the honey she needs to save her people. First there will be bittersweet farewells as her time as the witch’s “pet” ends. Her romance with the girl in the mirror will end with the same volatile intensity it’s had since the beginning. Then in forest with the little bees Tynian finds more than she expects. Along with the honey she will find the bitter fruit of truth.

You can find the latest Forest Witch ebook on Amazon.

It is finally time for Tynian to begin meeting the mysterious and terrifying guardians of Pollena’s honey, the Forest Witch’s “precious darlings”. Their presence takes acclimating to, so they will be introduced to Tynian before she is introduced to them. This provides an opportunity for Tynian to learn more about the freedom and joy that can be found in bondage.

Tynian’s romance with the girl in the mirror deepens as she helps the girl begin to explore her new ability to form a full spectral body to interact with the world outside her mirror. But the girl has begun to realize how little time she has left with Tynian. As her mood darkens she clings to her Elven lover with more desperation.

By philohunter
After a lot of thought I’ve decided to tweak my project Queue a lot. Mostly this is being done to help me focus and get more writing done in more complete ways. Going forward I’m going to have 5 slots, each a different kind of project. I am going to try hard to keep to those 5 and not add more.
Limiting my projects is important for my output. I suffer from bipolar and although I have it about as under control as you can I still have hypomanic episodes and during those I tend to start a lot of projects and get unrealistic expectations on what I can accomplish. Trying to limit myself this way will hopefully help keep me from getting carried away, which should lead to more smut and more completed stories for you.
So, here are the five slots and what will be in them for now:
My plan for writing schedule is to alternate between writing a chapter for the Amazon project and one of the other projects. The plan for all of the projects (except the backer driven ones) is to throw up polls on Patreon and Subscribestar to let my backers decide what I work on next after each is finished.