Ebook Release: “The Tale of the Nemorvian Band Part Three”

Another section of this poll driven story has been moved out of the free section and is now only available as an Ebook. You can find it on Amazon or Smashwords.

Purchasing the Ebook is a great way to show your support. I also have a Patreon, and backing at certain levels will get you copies of any stories I publish in Ebook form.

The next part of this poll dirven story has been cleaned up and is now available as an Ebook on both Amazon and Smashwords!

I’m not sure if what’s left to re-edit will be enough for a third Ebook, but regardless once I’m all caught up I’ll start writing the new section. I’ve already got it all outlined and ready to go so hopefully it will be done soon.

Ebook Release: “The Tale of the Nemorvian Band Part One”

I’m working my way through this half finished Poll Driven story, cleaning what’s finished up (and changing the narration from present tense to past tense). The first chunk of the story is all cleaned up and published as an Ebook available on Smashwords. If you enjoyed the story buying a copy is a great way to support me, and the cleaned up version is a LOT better. It really was a mistake to try and write the poll driven stories in present tense and I’d like to make my way through all of them changing that.

I’ve got about two thirds more of the story to work my way through then I’ll begin working on adding to it. The new sections will be posted to the free section, but eventually will be coming down as they become Ebooks. When the story is all done I’ll gather all the Ebooks together into one large collection.

A brand new story is ready and up on Smashwords!

Pink Puncher has had a rare career of total success, having never been defeated by any foe she’s faced. Even though her body doesn’t look tough (she’s short and slightly on the pudgy side with massive, almost inhumanly large breasts) she’s been able to take everything the backwoods criminals in Drucker County have thrown at her.

But that’s all about to change.

The Drucker Brother’s, a pair of petty criminals she’s been throwing in jail for years, are free once again. But they have something they’ve never had before: a secret. Specifically they know about Pink Puncher’s secret weakness. And soon she’s going to find out what happens when her foes know the truth about her greatest weakness…

This 9,000+ word one-handed read is intended for adult audiences only and includes scenes of graphic sexual nature.

It’s a pretty straight forward intro to a character with a MAJOR weakness (hint: she tries to avoid seeing dicks). I’m hoping to build on it and continue her story and expand on the setting, which isn’t in a major city. 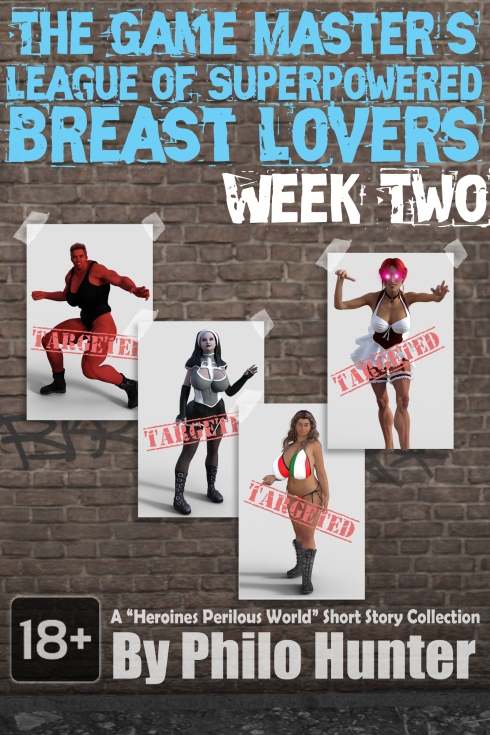 The second week of The Game Master’s League of Superpowered Breast Lovers has been published and is ready for all you perverts to start reading! You can find it HERE on Smashwords.

If you were a supporter on Patreon you’d also be getting these stories, along with the Ebook, as a reward for backing me. If you are enjoying the series you should think about becoming a back, since I’ll be posting each chapter there first!

“Brickhouse Vs The Undermen” Released!

Brickhouse is the strongest member of the Megatropolis Amazons, a hulking red skinned brute. But she has a secret, one she keeps hidden from the public with a specially designed, high tech bra. Her breasts, which seem as large as any other superheroine, are actually inhumanly large and soft. It’s her greatest shame and her greatest secret, one she guards very closely.

There she falls under these monster’s spell, becoming a willing member of their hive and birthing their young. But the experience will push the mighty heroine to her limits, especially after the Undermen discover the secret of her titanic breasts. She’ll escape, but she’ll be forever changed by her experience with the Undermen.

At over 25,000 words this one handed read will please all fans of superheroines in peril, monster impregnation, and huge breast! But be warned, this tale includes graphic sexual content and is intended or adult audiences ONLY!

“The Corruption of Vicerna, The Goddess of Justice Part Two: The Border Wars” Released!

The second part of my newest serialized tale is out and ready for reading! You can find it on Amazon or Smashwords. You could also get access to it by becoming a Patreon backer!

The Orc Horde grows ever stronger, a mass of warring tribes being formed into a mighty nation. The faith of Bodruer is being spread through all the Orcs, and with the faith comes the faithful. Powerful priests and paladins who hears their god’s commands.

Karrhghed is one such Orcish paladin. Infused with the might and magic of his god, and close adviser to the mighty Temira Nosehammer, he has seen a vision commanding him to head into the Dwarven lands and retrieve some very special items. This quest begins a cascade of events orchestrated by Bodruer that will one day lead to the corruption of a pure goddess.

Meanwhile the goddess Vicnera has sent one of her Night Elf paladins, along with her Ranger companion, on a mission into the Orc lands now obscured by the growing might of The Corruption. Little do these two Night Elfs realize the danger and perversion they are headed into, or the plans Bodruer has for them…

This 14,000+ one handed read contains content of graphic sexual nature and is intended for adult audiences only!

“The Corruption of Vicerna, The Goddess of Justice Part One: The Enemy Is Freed” Released! 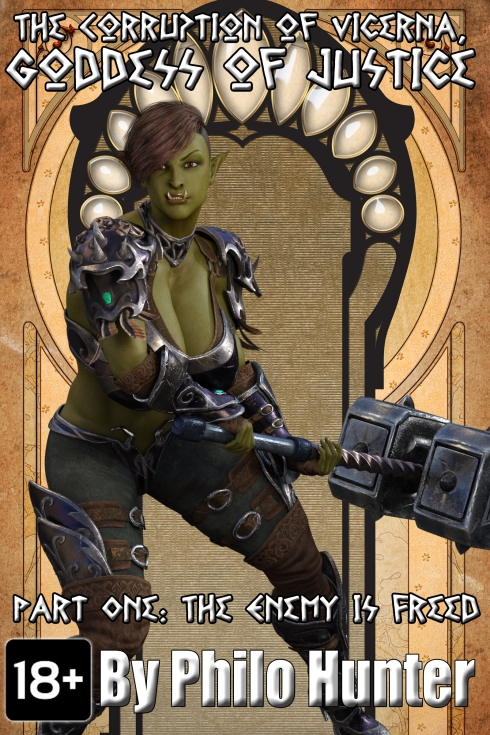 The first part of a new serialized tale is out and ready for reading! You can find it on Amazon or Smashwords. You could also get access to it by becoming a Patreon backer!

Temira Nosehammer is a mighty Orcess warlord that has done much to gather the warring tribes of her people under one banner. But her leadership is still questioned. She’s decided to make use of an ancient legend, one that tells of a mighty female warrior entering a cursed cave and vanquishing a great evil that, that if she does this her and her people will be blessed by an ancient god.

With the help of a captive Night Elf slave she will journey to this cave and meet her destiny. There, imprisoned by Vicerna the goddess of justice is an imprisoned Demon, a powerful god who serves The Corruption. Temira will do what she must to free this god of aggression and earn his favor…

This 9,000+ one handed read contains content of graphic sexual nature and is intended for adult audiences only!

“Alarian Tales of Perversion 3: At The Crossroads Inn” Released!

A brand new collections of shorts set in my Fantasy setting, Alaria, is published and ready! At over 29,000 words this one handed read has plenty of Fantasy themed kinkery to go around. You can find the book on Amazon and Smashwords. But if your a backer of my Patreon then you’ll have access to all of the stories contained within within the next week or so.

Of course, this is Alaria. Strong sexual urges and the dark forces of The Corruption are slowly spreading all through this world of swords and sorcery. Many of the items in Alaria have strong enchantments on them, some seeming more like curses then boons. And thanks to The Corruption many of these are sexual in nature.

And then there is the fact that Maaleas himself might not be who he seems. One thing is for certain: if the story takes place in Allaria there’s going to be plenty of kinky fantasy themed sex!

A brand new Heroines Perilous World Short story has been released! At over 23,000 words this one handed read will please fans of superheroines in peril kinkery. You can find it on Amazon or Smashwords (or if you become a Patreon backer you will get access to all of these stories over the next month). It includes the following stories:

The Sleepmeister’s List: Miss Mexicana – Miss Mexicana is newly arrived in Megatropolis and eager to make a name for herself. When the city’s most famous reporter offers her a chance for one on one interview she jumps at the chance. But she’ll soon discover that the interview is a trap set by the city’s newest supervillain: The Sleepmeister! And this fiend has a list that he’s working his way through, and her name is first. Kinks: Sleep induction, body control, large breasts, mammary intercourse.

Archbaroness in a Meat Sandwich – Leader of the Megatropolis Amazons and paragon of Megatropolis, Archbaroness has been able to defeat any challenge she’s faced. But there’s some new muscle in town, two brothers who together have the combined strength to defeat the mighty heroine. Archbaroness will soon find out just what their trade mark move, “the meat sandwich”, is all about. Kinks: Interracial (black guys, white girl), threesome/spitroasting, rough sex.

The Sleepmeister’s List: Brickhouse – The Sleepmeister is at it again, setting up another trap so he can cross one more sexy heroine off his list. This time he’s hidden himself at The Fluffy Pink Princess, the strip club where all the villains hang out. Brickhouse is there looking for a fight but she’ll soon discover this is one villain she stands little chance against. And once under his power The Sleepmeister is going to find out just what Brickhouse has hidden within the special sports bra she wears. Kinks: Sleep Induction, Huge breasts, mammary intercourse.

Electro-Girl Vs. The Heroine Readiness and Certification Test – This young speedster is about to face a challenge that her powers can’t help her run away from: an institutional test to see how well she stands up to subliminal hypnosis. It’s a test the busty Asian heroine is destined to fail, much to the delight of her testers. Kinks: subliminal hypnosis, stealth induction, mammary intercourse.

The Sleepmeister’s List: Psychia – Psychia, potent telepath and prominent member of the Megatropolis Amazons, has been called in to help the police investigate a series of mysterious sleep spells. She’ll soon pinpoint the source of these strange events: none of then The Sleepmeister himself! Pretty soon she’ll find herself just another heroine he’s able to cross of his list. Kinks: sleep induction, foot fetishism, vaginal intercourse.