New Ebook: “The Corruption of the Time Mage: Part One” 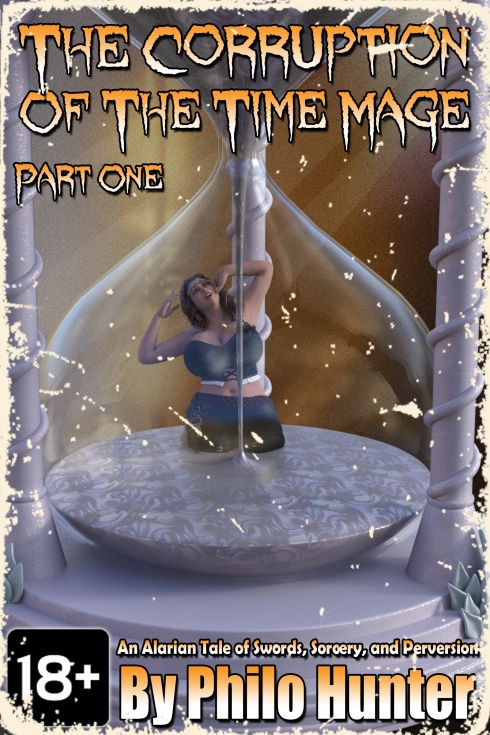 A new Ebook set in Alaria is ready for you all to get your sticky fingers on! You can find it HERE on Amazon.

Proud and ancient Elves. Savage and wild Orcs. Dwarven smiths. Human rogues, wizards, and warriors. The world of Alaria is full of them all and more. But running through it all, hidden down sinister alleyways, seeping out of dark thickets, urged forward by dark cultists is The Corruption. Everywhere it goes it spreads darkness and sexual perversion, defining the realm of Alaria…

Baer’theas Evenfluke the White has spent his long Elven life questing and adventuring, learning all he can about everything magical. But there is one kind of magic he’s never learned much about: that which controls and alters, and even STOPS, the flow of time.

That is about to change.

Amongst the young Humans he travels and adventures with is a Dwarven Bard, Lanven, and the two have never gotten along. Lanven taunts the Elven Wizard constantly, insisting she’ll bed any man other than him. Although the short, wide, plump Dwarven woman disgusts him the idea of not being able to have something only increases its appeal. Baer’theas DOES want Lanven, he just hasn’t admitted it yet. As he discovers the truth hatred will become obsession…

Meanwhile, the gods of Alaria play their games, using mortals as their chess pieces. Some of them have decided Baer’theas is fated to become the greatest time mage ever to live while others wish to oppose those same gods at every step.

This one-handed read contains content of graphic sexual nature and is intended for adult audiences only!

The story centers on time stopping magic and an unhealthy obsession with a Dwarf’s large breasts. This is just the beginning of a new serialized story and I am hoping to get the second part out soon and as with all my stories I’ll be working on growing the world as I add to it and already have some pretty cool ideas I’m trying to implement.

I know I haven’t been very active the last month or so but hopefully that will be changing. My health is a bit better than it was and I’m leaning into a genre shift into Fantasy stuff which will hopefully help my productivity. I’ve already started outlining the next entry for the Nemorvian Band and the release of that will be my side goal as I keep working on this project.

This entry was posted on Saturday, September 26th, 2020 at 10:25 am and tagged with Alaria, Amazon, ebook, release and posted in Alaria, Amazon, book release. You can follow any responses to this entry through the RSS 2.0 feed.
« Version 0.3 of “Pervy Street Hypnotist” game released!
New Ebook: “The Corruption of the Time Mage” »