New Ebook: “The Corruption of the Time Mage” 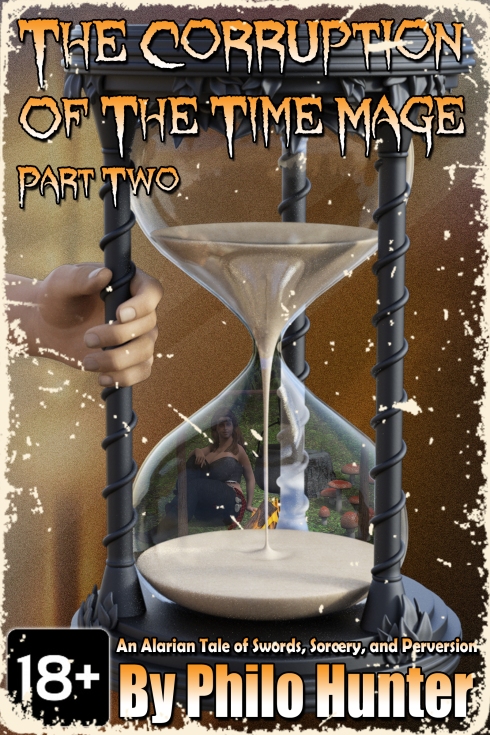 The second part of this serialized story is published and ready! You can find it exclusively on Amazon.

Proud and ancient Elves. Savage and wild Orcs. Dwarven smiths. Human rogues, wizards, and warriors. The world of Alaria is full of them all and more. But running through it all, hidden down sinister alleyways, seeping out of dark thickets, urged forward by dark cultists is The Corruption. Everywhere it goes it spreads darkness and sexual perversion, defining the realm of Alaria…

Baer’theas Evenfluke the White has his charm full of divine power. Whenever he wishes he can use the charm’s power to stop time. And each time he does so he learns a little more about the power to not just freeze time in place, but control the people frozen in time as well. He is being educated on a school of magic long forgotten in Alaria by forces far greater than the Elven Wizard, forces that wish him to become the greatest Time Mage to ever exist.

But the quest his party has set out on isn’t just filled with stolen moments of frozen time where he gets to indulge in his growing obsession with Lanven, the curvaceous Dwarven Bard that has become the center of all his carnal desires. As the party of adventurers nears the ancient dungeon they quest to explore dangers grow around them, hints that the dungeon hides a powerful master of the Necromancy. Before they reach their destination the Necromancy-touched monsters of the wild forest will pose a deadly threat that will take all of the combined martial skills of the party to survive.

This one-handed read contains content of graphic sexual nature and is intended for adult audiences only!

I’m going to take a quick break form this story to put some work into outlining/writing the next entry for the Nemorvian Band. Depending on how quickly I am getting progress on that done I may end up shifting back to the Time Mage story to get a third book out before the Nemorvian Band gets finished. Looking out past that my plan is to replace the Nemorvian Band with work The Northern Outpost.

This entry was posted on Saturday, October 3rd, 2020 at 10:02 am and tagged with Alaria, Amazon, ebook and posted in Alaria, book release. You can follow any responses to this entry through the RSS 2.0 feed.
« New Ebook: “The Corruption of the Time Mage: Part One”
New Ebook: “The Tale of the Nemorvian Band Part Five” »

2 responses to “New Ebook: “The Corruption of the Time Mage””